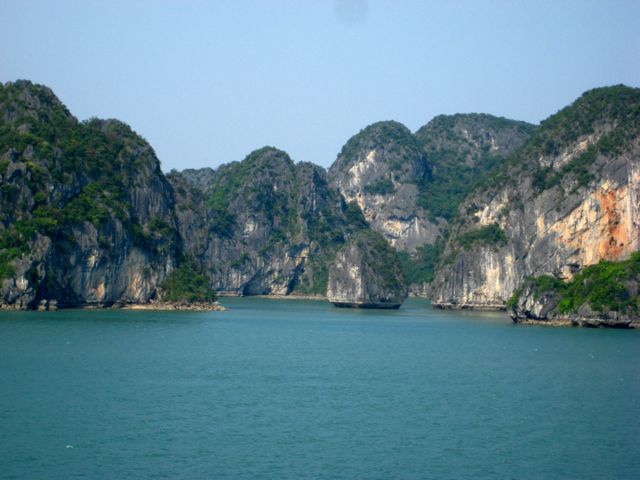 Today brought more Vietnam shenanigans, but things are fine and the sail-away was lovely.

Prior to even going to Hanoi, I had arranged for us to be driven back to Hong Gai (the closest seaport), a little over three hours away. Our ride was going smoothly.

About three hours in, I just happened to see our ship. It turns out that even though they had reserved a berth at Hong Gai two years ago, the local authorities gave it away to somebody else. (You recall we had a similar problem in Ho Chi Minh City).

It was a fluke we even saw the ship. I am not sure what I would have done otherwise, but I would have figured out something. Probably, it would have been to call the ship emergency line in Florida, and going from there.

So, then we get to the right pier and the authorities at the gate won’t let the car in. We called back to the hotel to explain and ask for their help. After being put on hold for a bit, the hotel came back on and said we had just paid for transportation to the port, and not to the ship. Nice.

Finally they to let Allyn and me go to the ship – on foot. With baggage in tow, we hiked the approximately half mile to the ship.

We were welcomed by the ship’s staff and remembered why we like cruising.

Most of the afternoon was spent at leisure, on the balcony, watching Vietnam behind us. It was pretty and peaceful as we sailed along Halong Bay.

It was formal night onboard. We stayed in and watched “The Bridge on the River Kwai,” the DVD I picked up in HCM City on day 80 for $0.85.