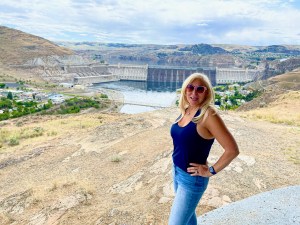 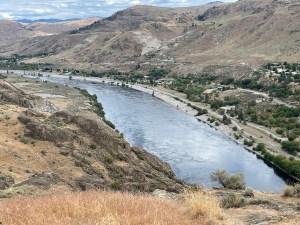 The main vista stop for us between Twisp and Spokane was Grand Coulee Dam. We have seem many dams, but none nearly as large. In fact it is the largest power plant in the US. Originally it created significant power to run the (WW II) war effort in this part of the country. In the 1950s it was adapted to also be a large source of irrigation for the area.

It is definitely not beautiful; just huge. Sadly the tours were closed due to covid.

Interesting factoid – In 1941, when completed for till the end of the century, Grand Coulee Dam was the world’s largest concrete structure.

Related interesting factoid – Since 2003, China has poured more cement every two years than the US did in the entire 20th century. 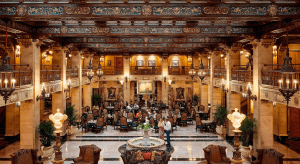 We are visiting Spokane for two days. It is our last Washington State overnight. There is very little similar to Eastern and Western Washington. Eastern Washington has much hotter summers and colder, snowier winters. They have much more farming. People are whiter and more conservative.

Our hotel stay was at The Historic Davenport Hotel in Spokane. For over 100 years, it has been the area’s finest. It was closed from 1985 until 2000 and then restored. 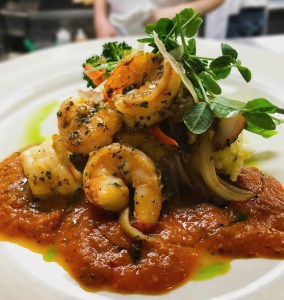 For sure the best meal we had here was at Wild Sage Bistro.