We headed out this morning for Cannes where we had to give a final goodbye to our yacht-for- a- week, but gave a big hello to The Majestic Hotel which will be home base for nine days. 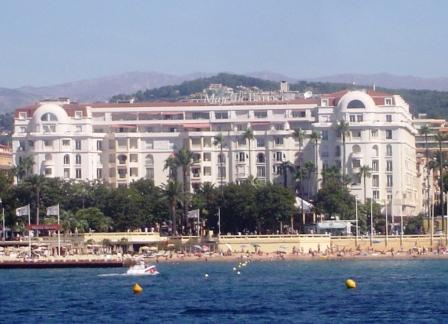 Michael is tooting off to Istanbul to visit friends and will hook back up with us for the next leg.

I barely had time to handle the room situation and then had to get back to Monte Carlo to play in the finals of the tournament from a few nights ago.

Tip – It is almost an unwritten rule that in the older hotels where most rooms are rather unique, that you must show displeasure with the first one that they put you in so that they will give you a better one, for the same price of course.

Cold decked in Monte Carlo – The tournament was a drag. I came fully prepared to win, but only mustered up a 33rd which got me my $4,250 back, but wasn’t enough to cover the $250 taxi ride back to Cannes. The JETSETWAY would, of course, be a limo but I assure you I wasn’t in the mood to spend the $400 for the 1.5 hour ride.

I had laid my trap perfectly and was cold decked by my target.

Definition – Historically a cold deck has been an expression for a deck of cards used by cheats that was brought in fresh to a game with the cards preset. The expression gets its name because the deck actually felt colder than usual because currently used cards feel warm from handling. These days it refers to a hand that plays out as if it were a cold deck.