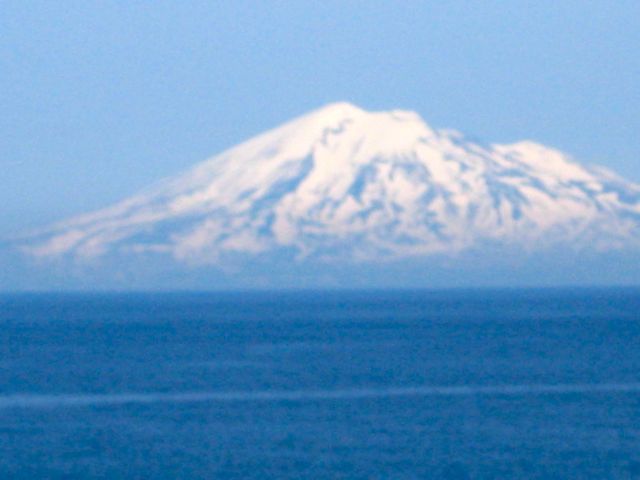 I woke up this morning in the far northwestern part of the Pacific Ocean, staring at snow-covered Russian Islands. It is amazing to think that on this same voyage, not too long ago, we were east of South America crossing the equator and heading south.

The hot weather is over for this trip. It is 40 degrees out today and we are still headed north. However, I heard it is 70 degrees in parts of Alaska. I hope that holds.

In Las Vegas the temperature is already about 100 degrees. This is where I’m supposed to say “but it is a dry heat.”

Tonight was formal night and we were invited to eat with the General Manager. It turned out to be just the three of us, because he wanted to pick our brains on many issues. We accommodated him big time.

His position used to be called Hotel Manager and he was responsible for the hotel part of the ship. Equals were the Captain and Chief Engineer.

Now the General Manager is the Senior Officer on-board, although the captain still has the legal safety and maritime responsibilities. It is not unlike the captain of an airplane who is responsible for the flight, even if his boss is seated in the cabin.

We had a fascinating cultural anthropology lesson today about Northern people. If you take away our U.S.A. egocentricity, and look at the world with the North Pole in the center of the map, certain similar traits of people make a lot more sense than they used to.