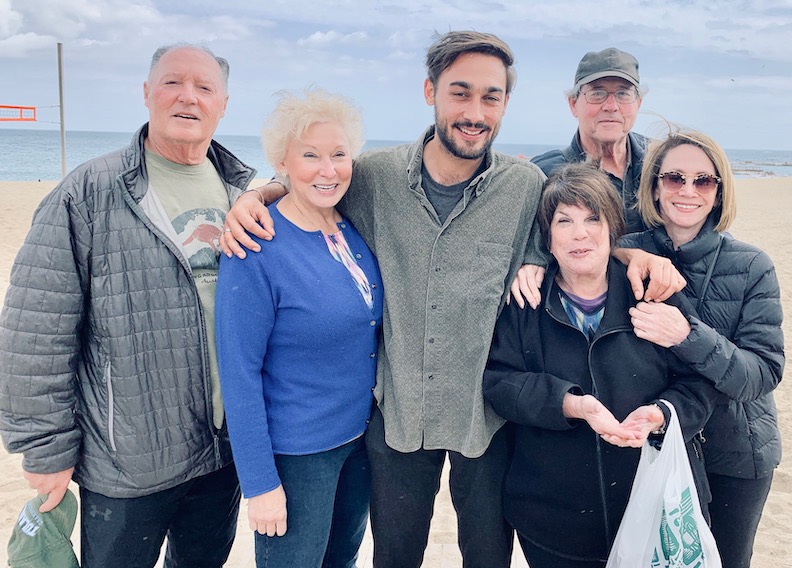 Having visited beautiful Barcelona many times, I decided to join some good friends on a walking food tour, also known as Barcelona’s secret food tour.  What a magnificent and informative way to see the city! 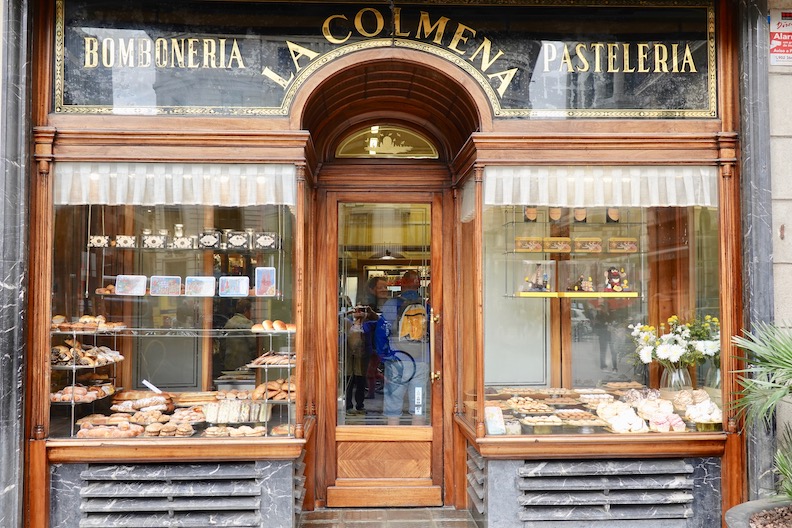 We met at  “Plaça de l’Àngel” square where our guide Miguel introduced himself and then introduced the 12  guests to one another. Miguel explained that if we were spending the day together we might as well have a blast.  With all smiles, we knew this was the beginning of a great day.
Wasting no time, out first stop was La Colmena, one of the oldest cake shops in Barcelona located right in Plaça de l’Àngel.  The exact date it was founded is unknown, but it has been thriving since 1849.  Outside the restaurant lies a special plaque which commemorates valued iconic establishments that have appeared in the city over the centuries and now form a valuable part of its heritage.
Our first treat was delicious.  And off we went! 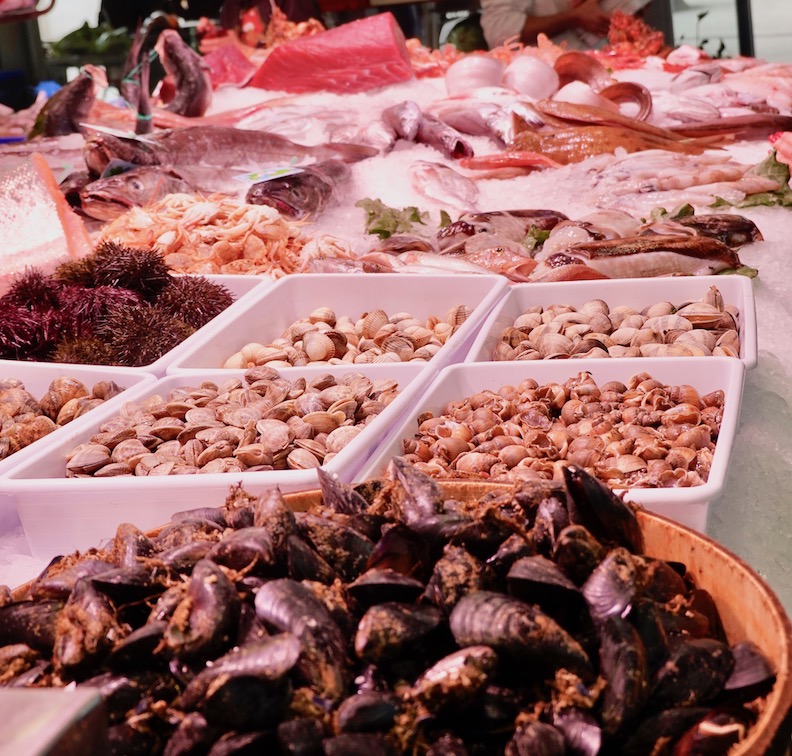 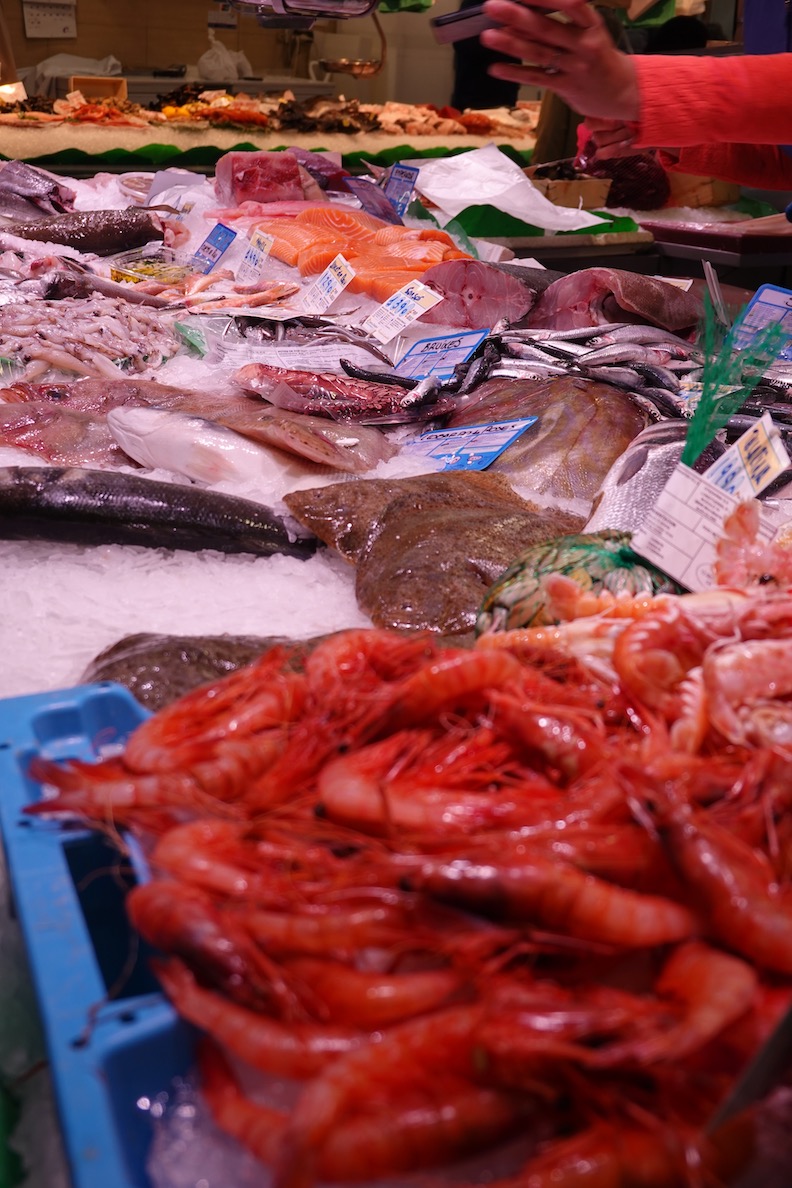 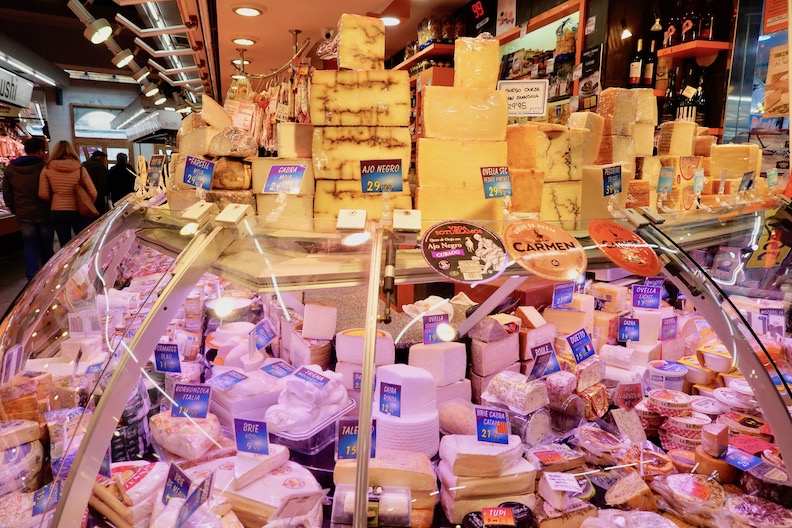 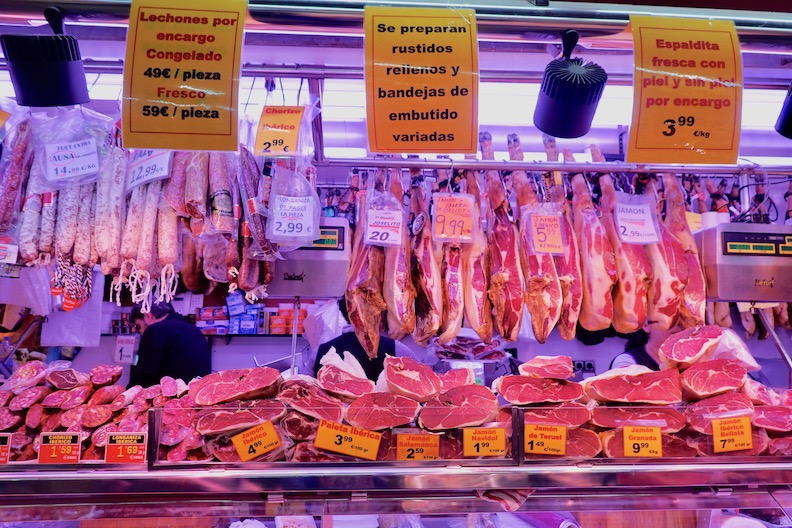 Next we visited a bustling market full of fresh, bright, shiny veggies, beautiful cuts of meat, fish and cheeses that immediately made us hungry.  Our guide explained the Castilian way of cooking.  The old mamas didn’t use recipes but rather went to the market daily, in order to see what was fresh.  After the mama’s bought the fresh food, they prepared the meal and learned generation after generation how to cook with fresh ingredients no recipe, as opposed to going to the local store looking for items in a recipe.
Our guide chose three different cheeses and two different pieces of Iberian ham, with one piece of ham being extremely expensive.  The fun part was having a blind taste test.  We all tried the different varieties of ham and of course, my friend Stanley and I were the only ones preferring the very expensive ham. 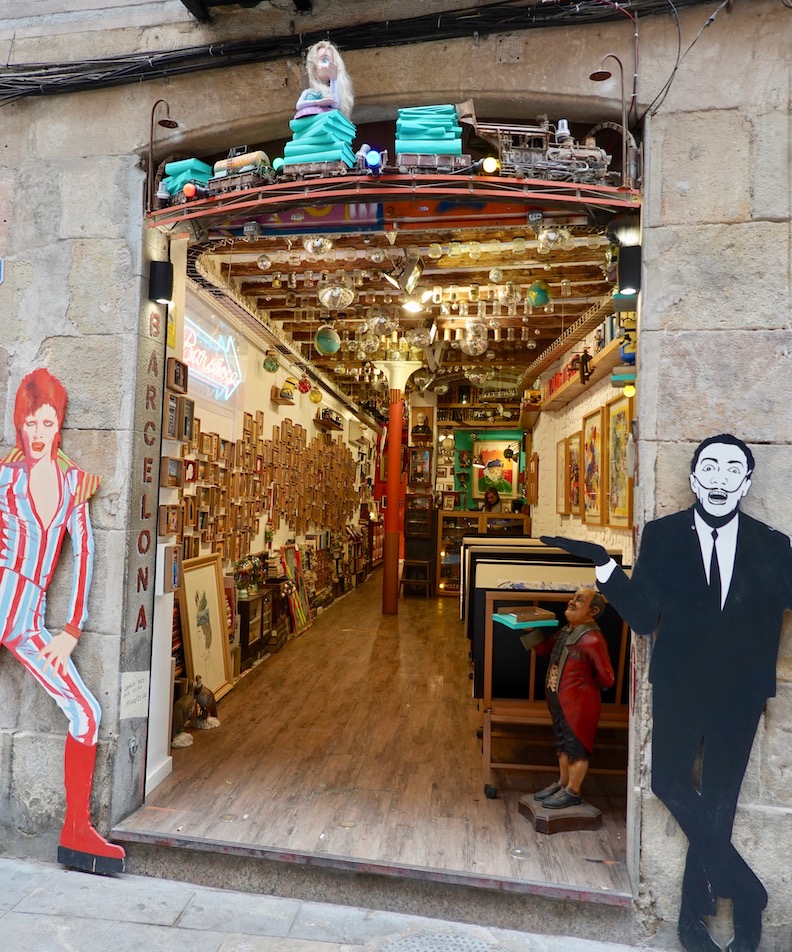 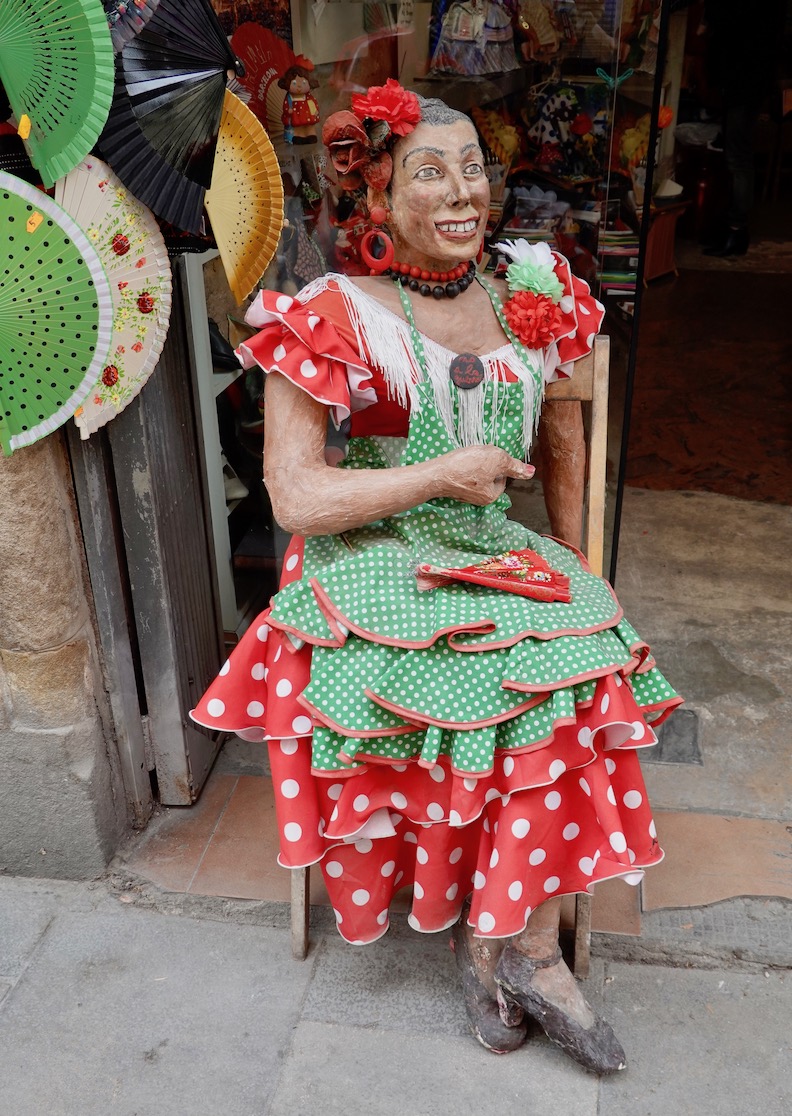 We walked through small alleyways with each store being more charming than the next. 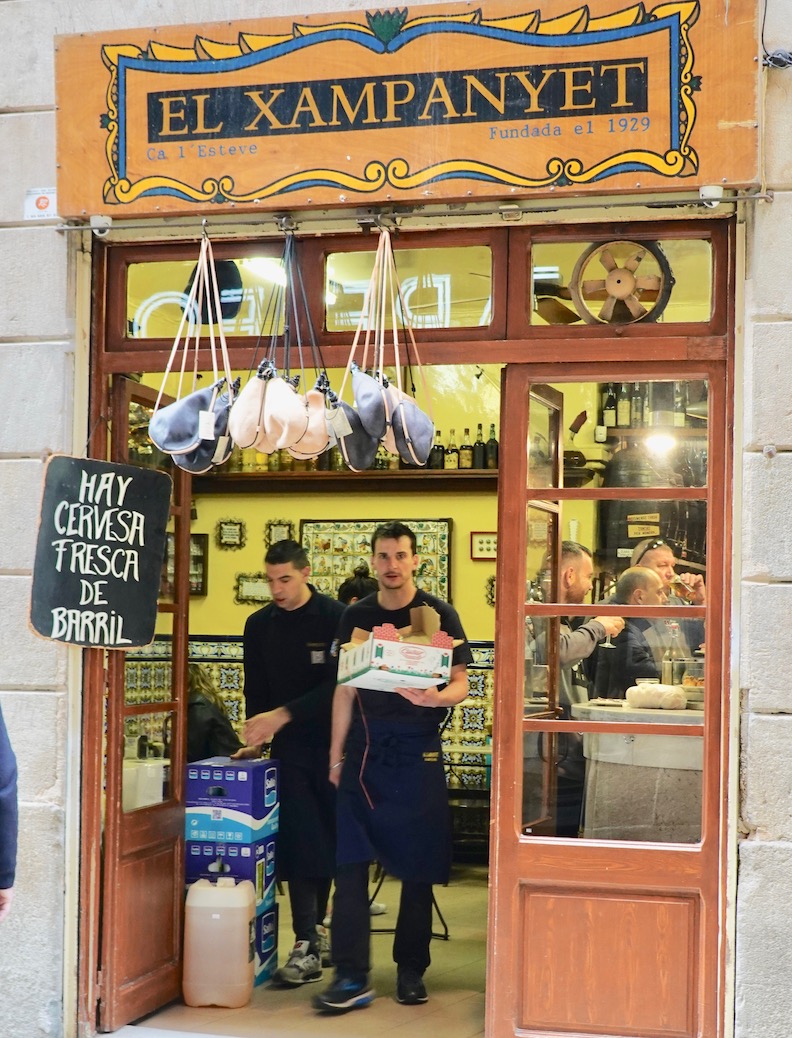 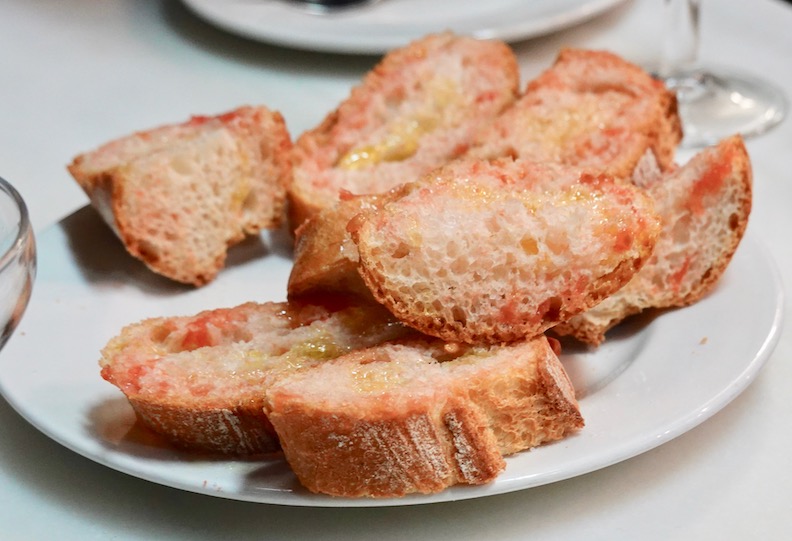 Our next stop was El Xampanyet,  one of the most popular tapas bars in Barcelona.  Our guide made sure we arrived just when it opened so we could get in.  He explained that when you go to a bar such as this one, you don’t expect to simply eat.  You order a drink, you speak with your neighbor and you order one item, just to make sure you will like the food.  It will be loud as everyone is speaking, drinking and laughing.  Without asking, the garlic bread arrives; a sliced tomato has been rubbed on a piece of toast with garlic and olive oil.  That begins the event.
After three generations, El Xampanyet gets it right, which is why it was standing room only when we left.  That’s after enjoying their famous anchovies, sausage, potato omelet, garbanzo beans and eggplant and other delicacies. 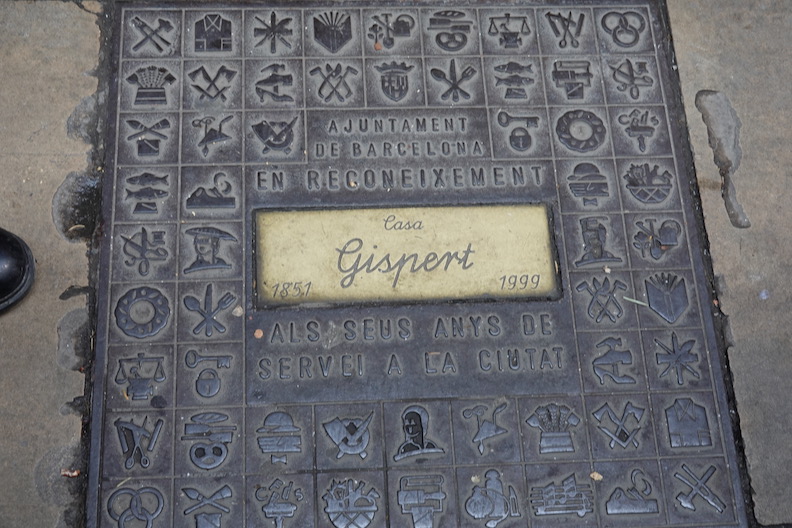 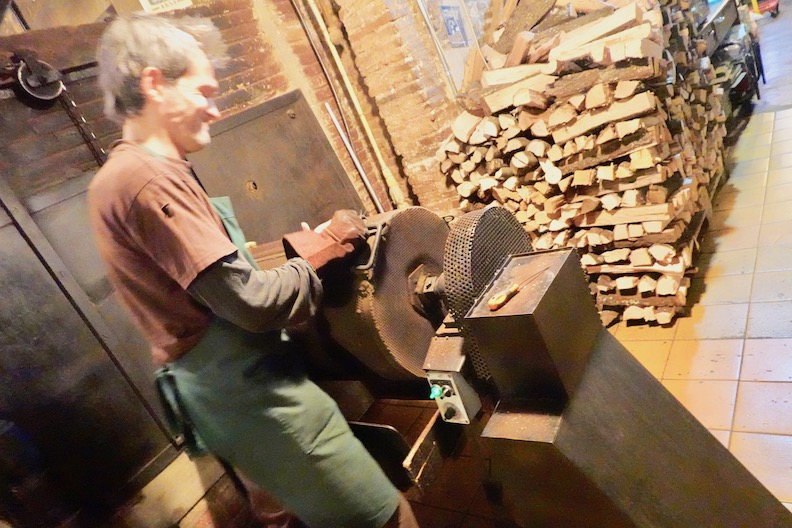 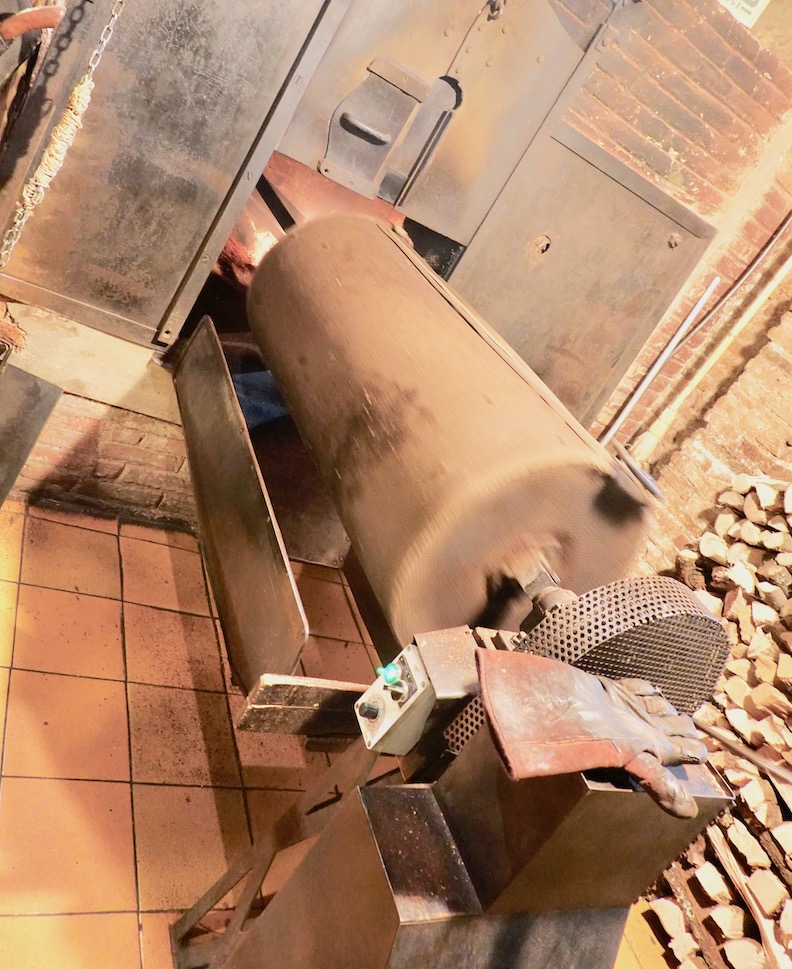 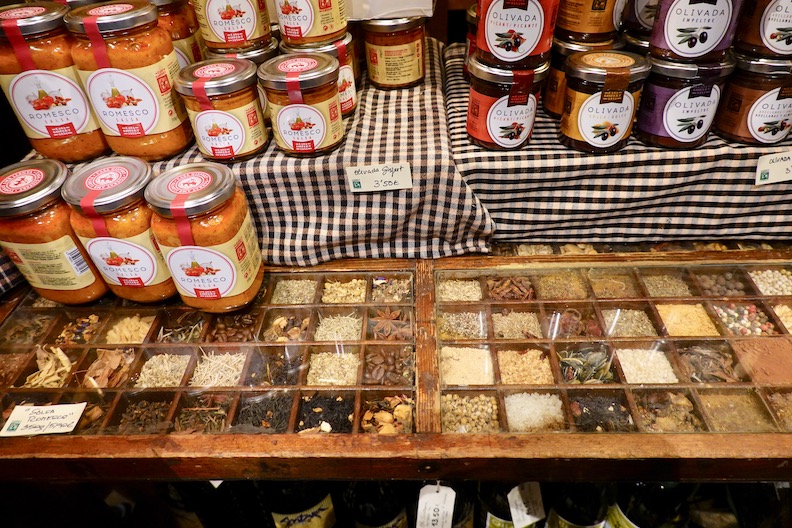 As you can see from the honorary plaque outside, Casa Gispert, opened its doors in 1857 and was awarded the honor of being a valued iconic establishment in 1999.  We know this because when we see such a plaque, the date on the left is the founding date and the date on the right is the award date.
The wood fire oven you see is unique in Europe.  The nuts are being roasted and from time to time, a worker opens the oven, pulls out the round barrel and tastes the nuts to see if they’re done roasting.  We had a tasting and the dry roasted flavor was like none I have ever had!
Thanks to its high quality products, Casa Gispert has been recognized as one of Europe’s 10 best food artisans, and awarded by Les Gourmands Associés with the prestigious Coq d’Or prize (Paris, 1999). 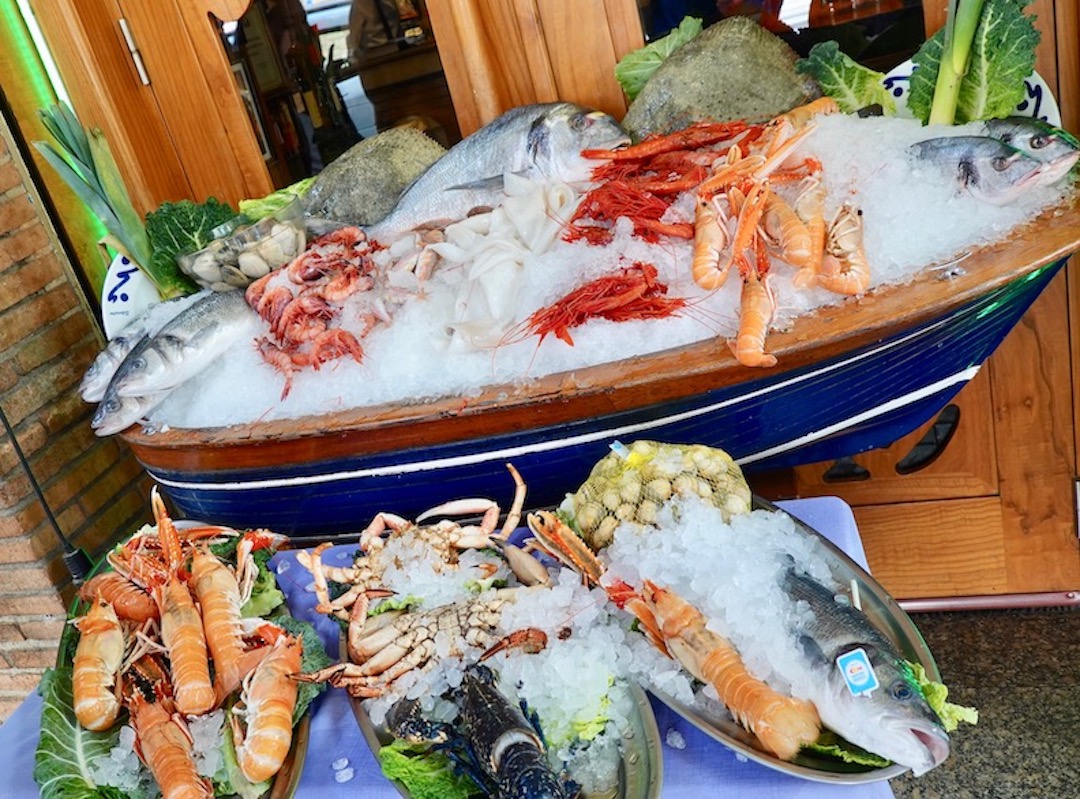 No food tour in Barcelona would be complete without the famous paella!   Although we were already stuffed, that did not stop us from enjoying this traditional meal that has held a place of honor and practicality in Spanish homes for centuries.
Walking back to the ship from a long, wonderful but exhausting day, Stanley glanced at his Fitbit and informed us that we had walked 7.2 miles!