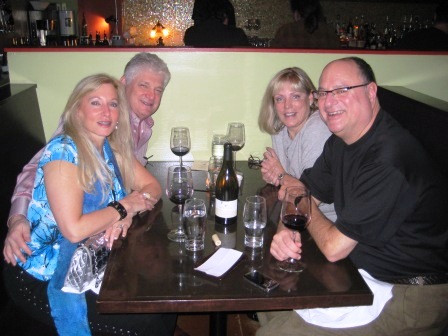 While in Seattle, Allyn and I had the pleasure of having dinner with our close friends Mike and Janet Silver. Not too many people have had more experience eating and drinking at various places around Seattle than the Silvers. They know that we crave neighborhood dining when in Seattle, because this is something we lack in Las Vegas.

As such, Mike’s pick was right on when he suggested that we eat at The Crow in lower Queen Anne. Located in an old warehouse, The Crow is close to downtown and the Seattle Center, and all other attractions the city has to offer.  And certainly is a deluxe American neighborhood bistro.

The Mediterranean platter worked well for starters. The Kumamoto Oysters were superb, and three of us had the chicken (which I will certain repeat next time around).

The wine list worked well with the food, complementing the entire dinner experience. Let them help you select, and you will probably have a bottle both better and cheaper than if you go it alone. As stated in the Seattle Times “They do everything absolutely right.” They certainly do. Visit them online at www.EatAtCrow.com.