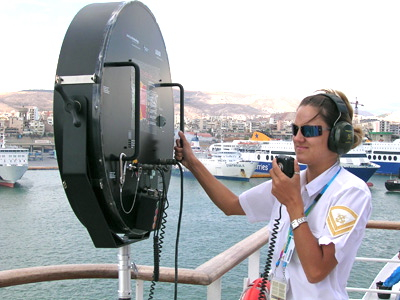 It turns out that there really are pirates in this world, and they are right here in Africa. My theory is that they just cannot be that big of a threat or the ship’s insurance carrier would not let them navigate these waters.

On the other hand, it must be some kind of real threat in that we have a group of highly trained Israeli commandos onboard. They joined us at the last port and will be with us until the end of April (when we finish circling Africa).

They patrol 24/7. They look just like normal guys. True, they have no fat on their bodies, but they also don’t seem particularly muscular. It probably doesn’t take a lot of strength to pull a trigger. Apparently there is ton of other security we don’t even know about.

An LRAD, a Long Range Acoustic Device, is installed on the back of the ship. It is probably about 4 feet in diameter and 4 inches thick (see photo above).

This gismo puts out an extremely focused, high pitched, high volume sound, which is deafening. It is generally used for crowd control elsewhere. Some call it a sound cannon.

It is in the back because nobody sneaks up on the front of a 46,000-ton ship which is zipping through the water at 20 knots.