Today I arranged for a private Jewish tour of Palma, Mallorca.

Tip – Generally opting for a private tour instead of a group tour is the smart way to go. Often just four people can sightsee cheaper with a private guide than signing up for the group tour. It certainly allows much more customization and knowledge while shortening the elapsed time. Sitting in a bus waiting for stranglers is not my idea of a good time.

I like Jewish tours because 1) I am Jewish, and 2) they tend to cover centuries of a region’s entire history. Therefore a Jewish tour is quite comprehensive.

Jews were persecuted severely in Spain for centuries going way back. They were formally banned about the time of Columbus, but many 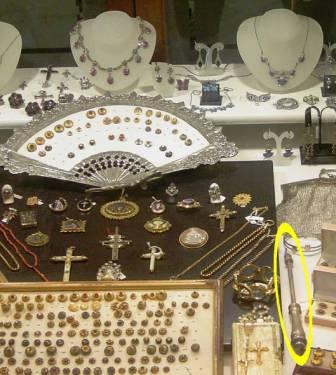 had emigrated by then. Many others converted to Christianity and their families practiced the faith for 600 years. Much of the population here is Chuetas who were originally of Jewish descent. Even after converting they were generally second class citizens.

Now some choose to regain their Jewish faith and convert, others feel there is no reason to convert because they already are Jewish. Yet others are very happy being Christian as that is what they have known for generations. Finally, some claim there never was any mixed blood. Actually there is significant mixed Jewish and Muslim blood all over Spain because of the mass conversions.

Many Chuetas practiced a few Jewish traditions, but never knew why. Sometimes traditions were passed along but not the rationale or background for the safety of the families. Even today there are some interesting things done and not said in the open community.

Note the picture on this blog. This is a window of a jewelry store mainly selling Catholic items. Notice the item circled in yellow containing a hand with a finger pointing inwards to the store. That is a yad. A yad is used by Jews around the world to point to their place when reading from the Torah. My theory is that here the store owner is secretly pointing out that he has some Jewish background – almost like a secret handshake. I asked my guide who knows the owners and confirmed they have a Chuetas background but are Christians.