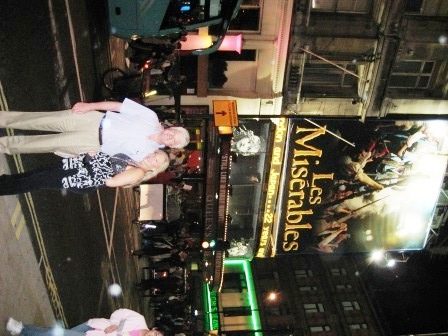 If you only do one thing in London, then go see Les Mis. I don’t know how I have missed it all of these years.

Les Misérables is the world’s longest running musical, now in its 22nd year. It is based on the 1862 French novel by Victor Hugo. The powerful story is full of passion, about a struggle for redemption.

What makes this production is the score. There are no spoken words. It’s not one of those fun musicals with a theme song that you find yourself humming for days. I am having a tough time articulating its moving strength. According to my wife, Allyn, who wrote music professionally, it is unbelievably musically sophisticated. The score fits perfectly with the tale.

Talk about staying power, it has been performed by 56 professional companies that have opened it in 233 cities in 38 countries, in 21 different languages. That is over 38,000 times to more than 51 million people.

Interestingly, it originally opened in September 1981 in Paris and failure in its short run.

Four years later when the English version opened in London, reviews by critics were mixed, scholars were offended by making a musical of this classic work and many thought it was too heavy to make it. The public felt otherwise.

Les Mis opened on Broadway in 1987, was nominated for twelve Tony awards and won eight including Best Musical and Best Original Score.

London Restaurant tip – A beautiful jungle-like setting is home to Blue Elephant, www.BlueElephant.com which serves “Royal Thai Cuisine”. You can also find it in about a dozen other major European and Middle Eastern cities. Just choose your beverage and order the tasting menu.