Lake Michigan is giant. In fact, it is the largest lake that is totally in the U.S. (The other Great Lakes are also in Canada.)

It should come as no shock that Holland has Dutch history. (Hence the name, Holland). The 251-year-old windmill De Zwaan is the only real, working Dutch windmill in the U.S.

Holland is a quaint, mellow place. I was surprised to see such an enormous sandy beach at Holland State Park.

We had a great dinner at Crazy Horse Steakhouse. Their concept of pinning a dollar bill on the wall for charity has allowed them to give $366,000 (of patron’s money) to local organizations since they started. It is a very nice touch. 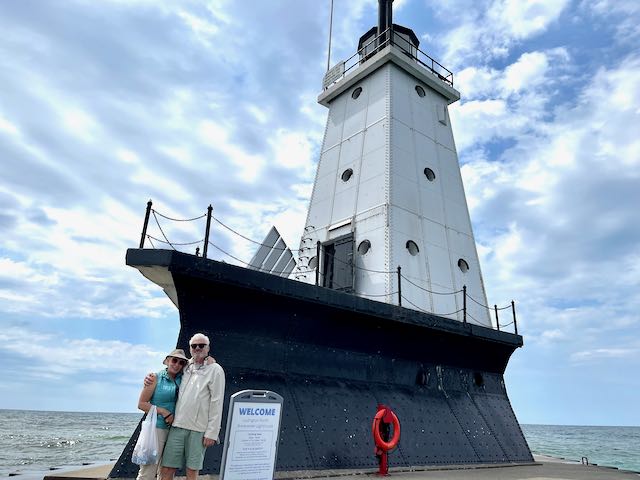 We stopped in Ludington on the way to Traverse City, our next stop. It is yet another lovely city and we felt like some exercise. It is over a half mile out to the Ludington Breakwater Lighthouse. Plus, then they had 54 ladder-type steps to the top.

After we had lunch in town at yet another interesting restaurant – House of Flavors. They produce 25 million gallons of ice cream annually.

At Traverse we went to Sleeping Bear Dunes where we hiked up Empire Bluff Trail which peaked about 400 ft. above Lake Michigan on a perched dune from the last Ice Age.

We could see Lake Michigan about 25 miles in any unobstructed direction. Straight west across the Lake about 60 miles is Wisconsin, but we would have had to be much higher to see it.

Sometimes the best dinners are when we just eat in and enjoy the surroundings.