Yesterday I started a twenty six day Mediterranean journey with my wife, Allyn, her two college-aged kids, Julian and Jessica, and my oldest son Michael. We plan on having lots of fun, on which I will faithfully blog; but first we had to get there. That is the toughest part of traveling these days.

We live in Las Vegas (it was 115 F, today) and August is a great time not to be here. The same is true for July, but I play poker and July is poker-time in Las Vegas, with literally hundreds of tournaments appealing to any size wallet.

Our travel route was: Las Vegas – Phoenix – London – Avignon, France. Things were supposed to be pure luxury because we flew via private jet on legs one and three, and British Airways First Class over the Atlantic. All in all, it was about as good as flying gets, with only a few irritants along the way.

There are many ways to travel via private jet and we will discuss this topic in depth later. Suffice it to say, it is incomparably superior to flying commercial. We’re talking: flying when you want, with no security lines, and thousands of additional airports from which to choose. 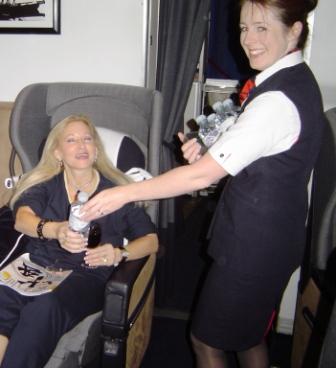 Unlike most airports, Las Vegas does not allow us to drive directly on the tarmac (to the plane). No biggie… We left the house at 3:45 pm and arrived at the airport at 4:00 pm. The pilot met us in the waiting room, we exchanged IDs, somebody took the bags to the plane, and we were taxiing by 4:10 pm. An hour later we arrived in Phoenix. A van met us at the plane and immediately drove us to the main terminal, where we hooked-up with British Airways.

The benefits of private jet travel aside, we fly to Europe and Asia commercially. Frankly speaking, British Airways First Class (and Business Class), is more comfortable, unless your private jet is really huge (which costs SERIOUS money).

We flew First Class, and it was a treat. The service, food, drinks, movies and amenities were all great, but long flights are all about leg-room.

Who knew you could push a button and have your seat turn into a bed? We had over six feet between us and the people in front of us. To make sleeping easier, BA actually adds a mattress and duvet, and provides pajamas. We provided our own Ambien CR.

Was it perfect? No. The plane had a luggage compartment problem in London which caused a two hour delay for us in Phoenix. Unfortunately, First Class doesn’t arrive any faster than the rear of the plane. The airport does have a nice lounge though, and quiet comfortable seats help pass the time and keep stress levels down.

On board the plane, normally British Airways has huge on-demand movie and TV availability. Unfortunately, when we boarded, we were informed that most choices were not available, and there was no time to fix the problem.

Tip 1 – Movie failure is fairly frequent. If this problem will bother you, carry your laptop and a couple of your own DVDs. Remember the JETSETWAY is often about reducing stress, as well as increasing pleasure. 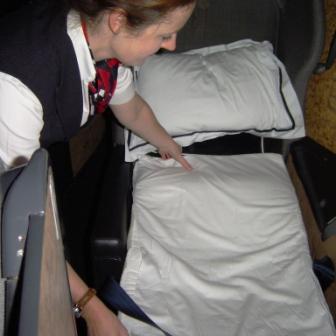 Tip 2 – No sane person I know spends $20,000 for a round trip First Class ticket. That’s what frequent flier miles are for.

Tip 3 – There is a huge difference between Coach and Business Class – way more than between First and Business. If you fly Business, make sure your airline has fully reclining seats.

Before we left Phoenix, we alerted NetJets (our private jet service-provider), that we would be two hours late arriving in London. The buzz on the plane from most folks was something along the lines of “I hope I can get out today and not have to stay overnight.” Not us. We travel the JETSETWAY.

Because we flew First Class, we were first off of the plane. Awaiting our arrival were two “handlers” with “Shulman” signs, who immediately whisked us out a side entrance and drove us to Immigration. The line was lengthy, but we jumped right to the front of the line.

We then darted downstairs with the handlers, and grabbed our luggage, which the handlers informed us was already pre-cleared with Customs (how is that possible?). We were zipped through a back door, and into a van for the three minute ride to our private jet, which was fueled and ready to go. Five minutes later, we were in the air ien route to Avignon, France (75 minutes away).