In August 2004, the Summer Olympics returned to Athens. It was the first time since 1896 that the Olympics were held in Greece, and the first time the flame travelled around the world to all former Olympic cities. My wife and I visited the sitghts in July while on our honeymoon cruise.

To this day I am amazed that they finished in time for The Games. As you can see, they not even close to finished with the construction just a few weeks before. They did not even seem to be working.

The “Running Man” statue you see below is outside the stadium. It is at least double life-size and is made from horizontal pieces of glass. It’s one of my favorite modern sculptures. 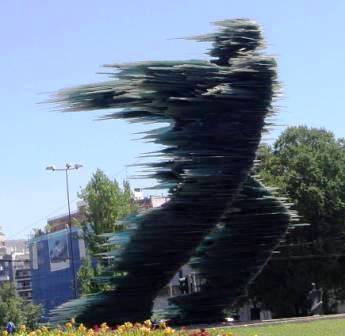