André Rochat, Chef/Proprietor of Andre’s French Restaurant, has been Las Vegas’ marquis chef for decades —  long before all the big names from New York and Beverly Hills arrived on the scene. The original Andre’s Restaurant is a 1980s renovated house in the downtown area. Almost three decades later, it is still fabulous. 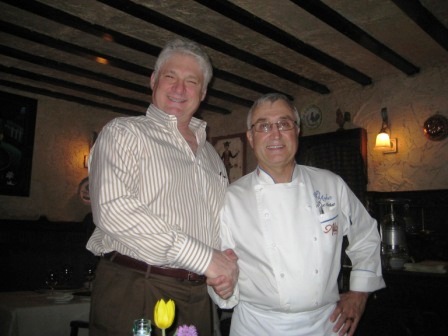 Andre has now expanded to a namesake restaurant in the Monte Carlo and the eye popping Alize which is on top of The Palms. All are lovely. All are special. But, the Palms can be a bit too noisy for those of us who like their restaurants quiet. As such, we chose the original, which will be closing at the end of the year, but still brings fond memories. Andres at Monte Carlo is currently closed for renovation and will reopen early 2009.

Allyn’s Dover sole, the best she has ever had, was cooked to perfection with its juiciness and sauciness. I had a veal chop, which I normally associate with Italian food. However, this one was A+ and definitely had a French flair to it. The signature two pound lobster thermidor and foie gras also received rave reviews.