I’ve probably visited St. Tropez fifteen of the last thirty years and still enjoy it. But make no mistake about it, it has outlived its reputation in many respects.

Bridget Bardot made it famous 50 years ago and it became famous for the rich and beautiful. It is quite secluded because it is at the end of a long peninsu 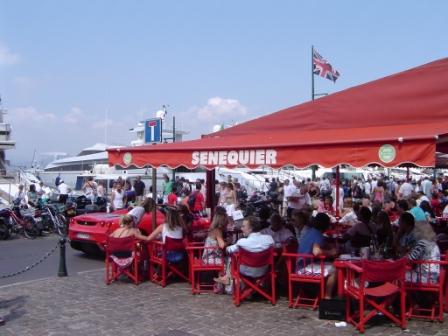 Nowadays it is so crowded that the super rich are nowhere to be seen, it is overpriced and overcrowded, especially in August. So here I am.

The trick is to not spend too much time in the center of town. The port is worth a peak and a couple hours. Senequier is world famous and worth a coffee and gelato.

The famous beaches are actually around the bend in a city called Ramatuelle. It is well worth an afternoon, the women are still world class, and it still has a hedonistic feel to it. Like other parts of Europe, especially France, what they call beaches are really portions of beaches that are private with accommodations rented by the day. Most have lounges, umbrellas, dining, bar, water sports and massages available. Many also have a hedonistic feel to them in proportion to the young single patrons. Moorea Plage is one of my favorites.

Tip – Be sure to bring your own beach towel. What do you want for 50 Euro

The other night I mentioned dinner at Port Grimaud. Tonight we went up to the Gassin which overlooks St. Tropez and is considered by many to be the most beautiful village in France. You may notice that often I do not mention restaurant names. That would typically be in areas such as where we have visited where there are countless ones that are close by and may strike your fancy.