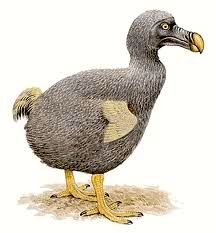 We have all heard about being dumb as a dodo; the bird that was so dumb it became extinct. FALSE.

It only lived on Mauritius, an island we visited today, way down the Indian Ocean off the Southeast coast of Africa.

The dodo, about three feet tall weighing 30 pounds, has been extinct since the late 1600s.

They were not stupid. They just lived without fear of attack, because they had no reason to fear people who were not living here.

They lost the ability to fly because they stayed on the ground. To some they appeared stupid because they ate small rocks, which aided in digestion.

So what doomed them? Explorers came and introduced dogs, rats, pigs, monkeys, cats and other animals to Mauritius. They ate the birds’ eggs, which were laid on the ground.