Manaus is one of the most unique cities in the world. It has a population exceeding 2,000,000 and is 900 miles inland from the Atlantic Ocean.

It is known as “Paris of the Jungle” because the fancy European “rubber barons” wanted a high end feel. These guys rounded up many thousands of Indians to work in unbelievably poor conditions on the rubber plantations practically as slaves. Meanwhile the barrons were lighting their cigarettes with hundred dollar bills just to be cool.

Shortly into the 20th century, the rubber business here was about gone with other Europeans planting rubber trees elsewhere and undercutting the Brazilian market. 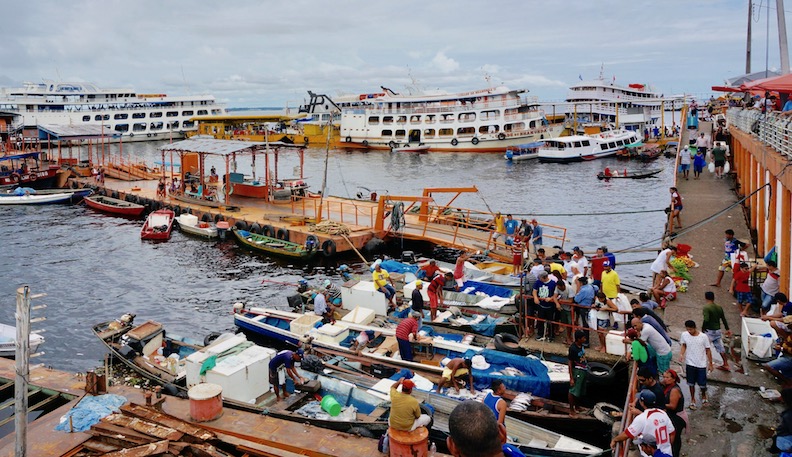 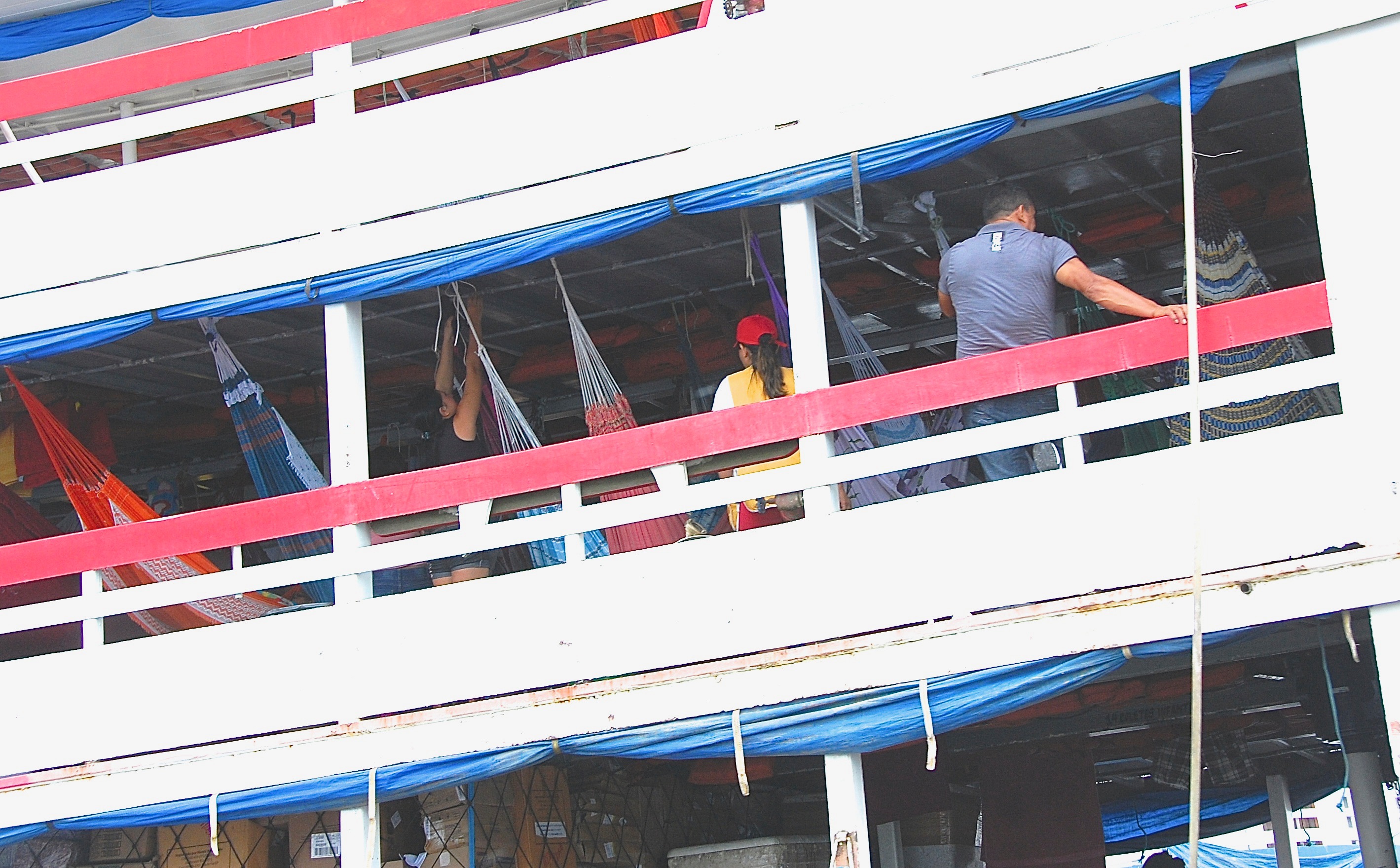 Manaus was stagnant for years. Then, about 50 years ago, Federal investments and tax incentives creating the Free Economic Zone turned it back into a thriving community.

Even though it is thriving economically, the Amazon tells a different story for many.

We are at the end of the road as far large ships can go, and by road I mean the Amazon because there is no highway system around.

Since most people cannot pay to fly, they take cheap ferries up and down the Amazon for 5 – 10 days where they take a hammock and sleep almost on top of each other. 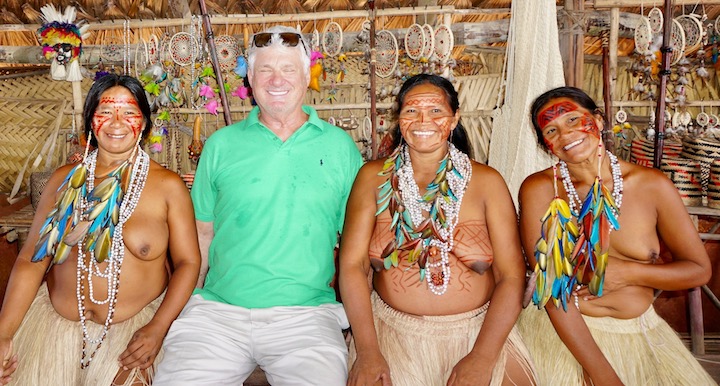 I hired a very good guide for 2 days, Herman, to give us the real feel for the Amazon and Manaus. What a start! First stop from this metropolis was 45 minutes upstream by speedboat and we were back 200 years with Indians. I’m talking the real deal. 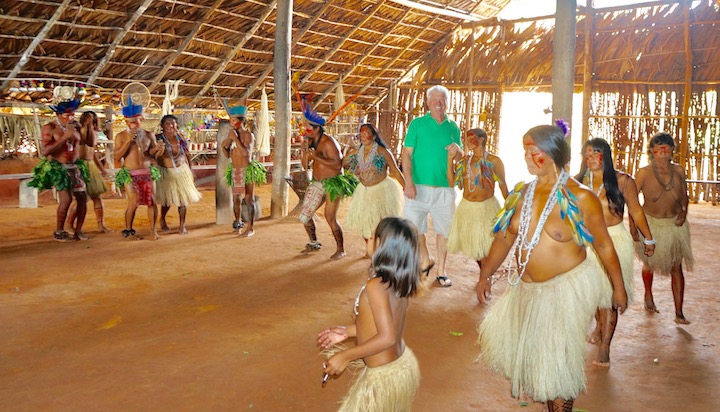 I’m not sure I have danced since my wedding, but I was afraid to turn this lady down in case they might be cannibals. 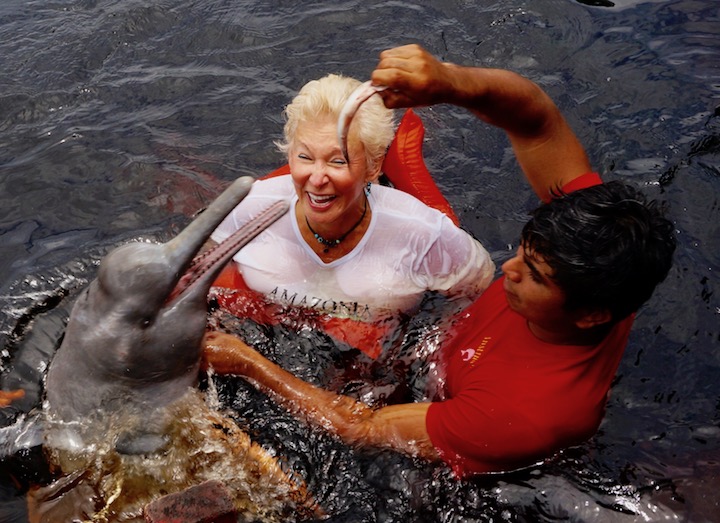 Then it was swimming with the pink dolphins. This is no park. It is the Amazon. 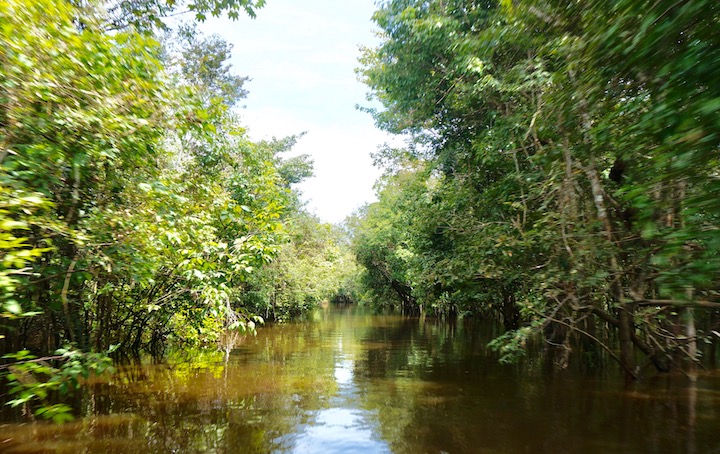 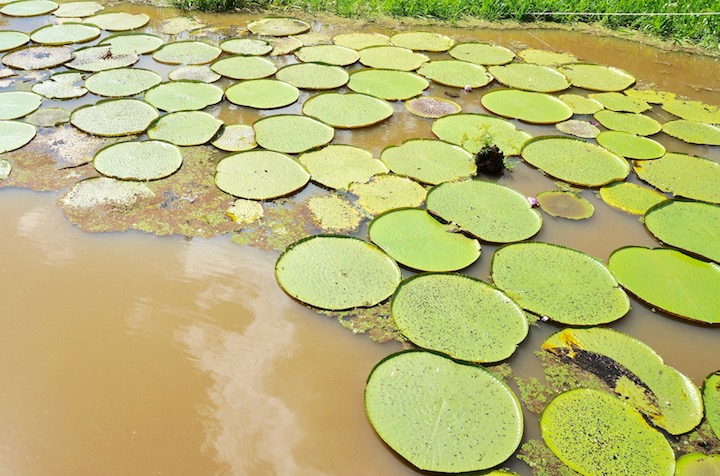 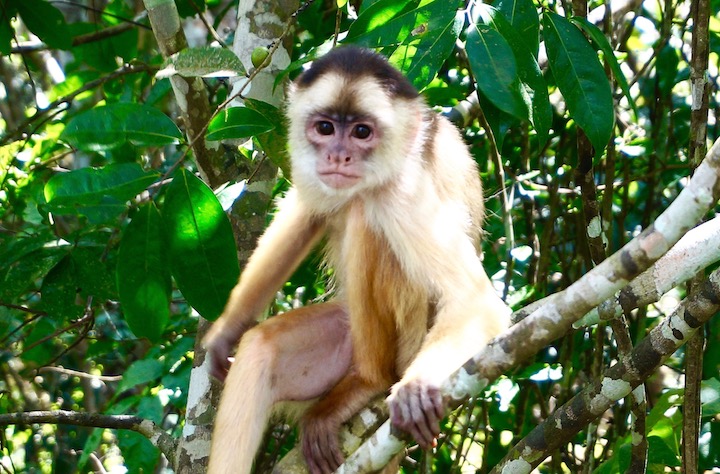 The backwaters of the Amazon are so peaceful. The lilies are over three feet in diameter. We saw many different type of monkeys. 20% of the world’s oxygen comes from the Amazon rain forest and over half of the 10 million identified animal species are indigenous. 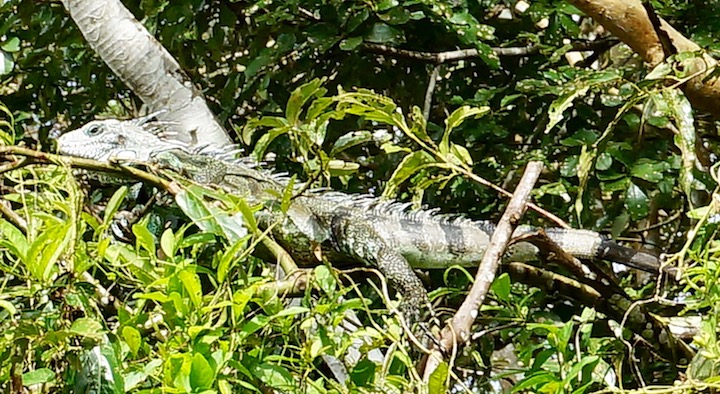 Allyn got a beautiful shot of a giant Iguana. I couldn’t see it live and didn’t even see it in the photo until it was blown up and pointed out to me. 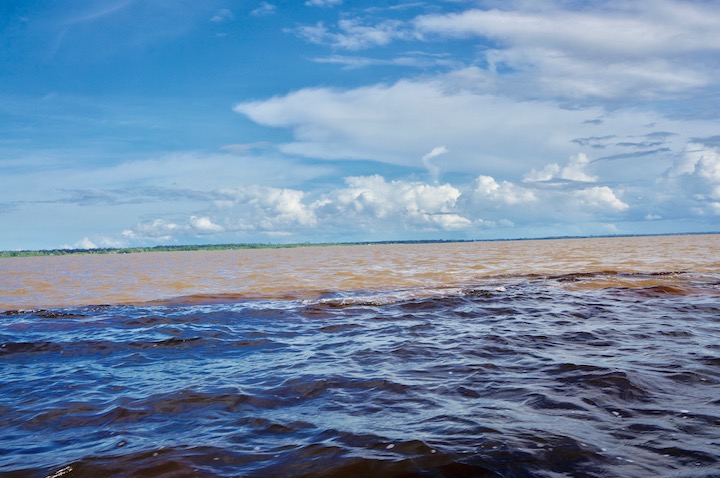 Where the Rio Negro and the Amazon intersect it is called the Meeting of the Waters.  They keep their respective colors for miles for several reasons – one is very much colder, slower and more dense. We dipped our hands in the water and the 10-degree temperature difference was immediately apparent. 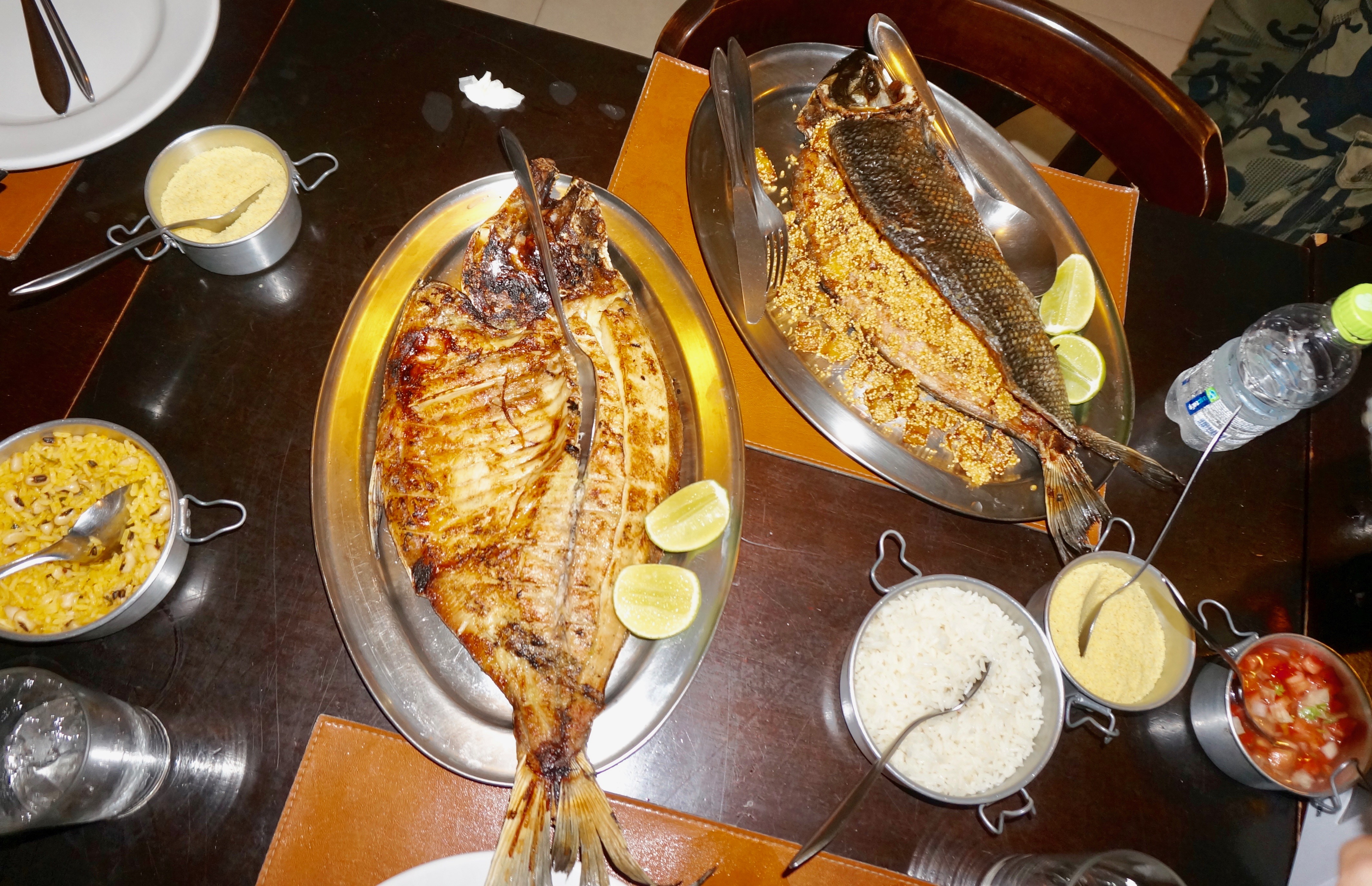 It seemed like the right idea to sample fresh fish in town for dinner. We were not disappointed. 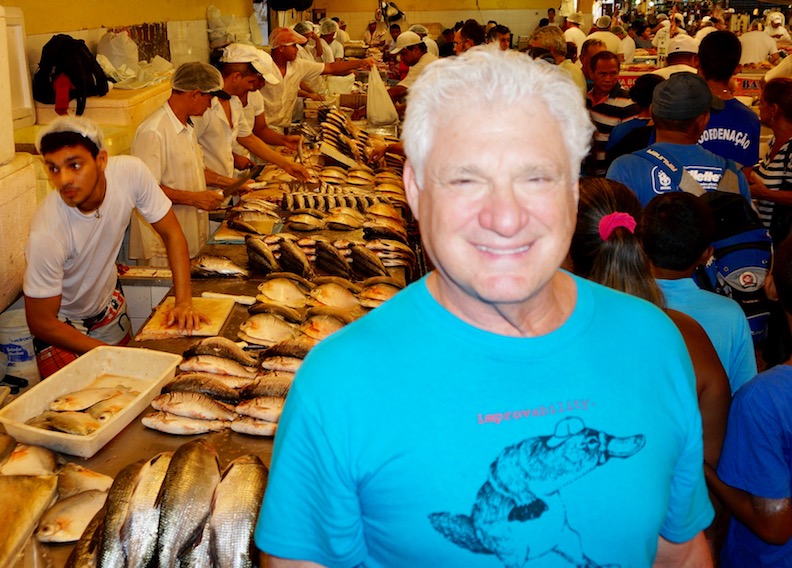 Today we visited the market in the morning. It was teaming with people. They are preparing fish for sale that were just caught this morning. There are 70,000 registered boats here including the fishing boats. 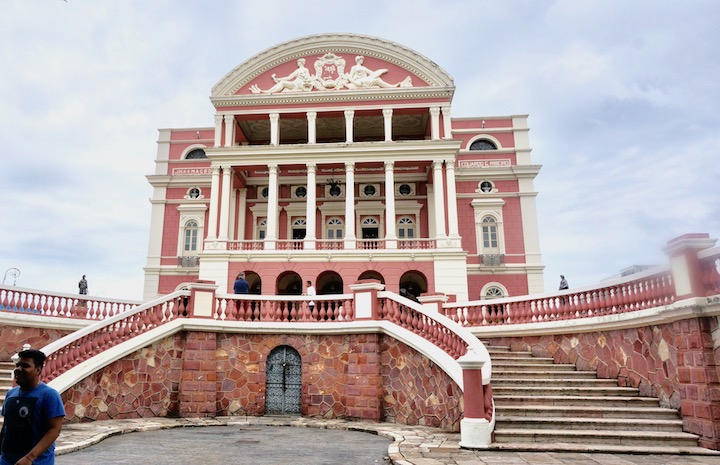 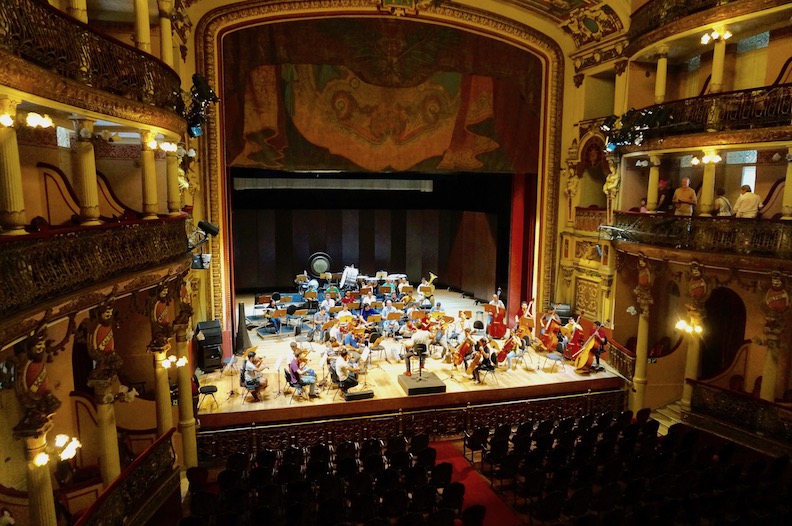 The Opera house was built during the rubber boom and has been restored four times since. They were practicing today during our visit.

Manaus is a truly unique place.