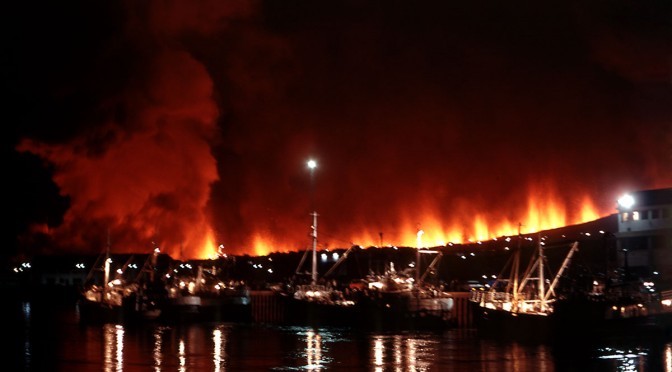 Heimaey Island is known as the Pompeii of the North. In January, 1973, with virtually no warning, a new volcano, Eldfell, erupted from underground beneath the small Icelandic island of Heimaey. It was less than a mile from the town of Vestmannaeyjar, which had a population of about 5,000 at the time. Within a day’s time, almost the entire island was safely evacuated.
Eldfell volcano erupted for about six months, covering much of Vestmannaeyjar in ash, destroying several hundred homes, and sending lava flows toward the harbor—at one point raising the water temperature to 111°
A year later most of the people resettled. Archeologists have uncovered many homes exactly as they were at the time, down to the breakfast still being on the table. 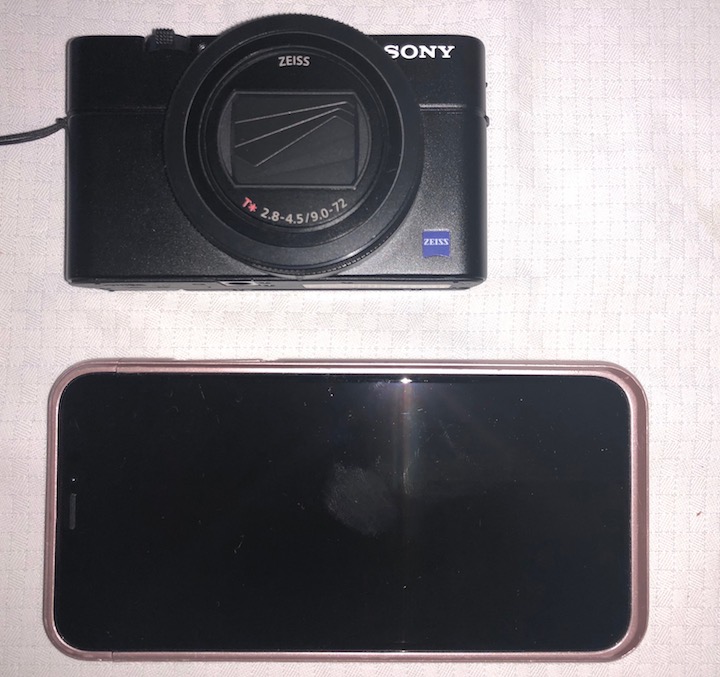 Before this trip I purchased Allyn a new Sony Camera RX 100 VI. We are just starting to learn how to use it; so far it seems great. We wanted great photos but didn’t want to pay thousands of dollars for camera equipment and lug around 10 pounds. It is tough for a recreational traveler like us to find the right set up in the $1,000 range. This one seems to do it. Can you believe how small it is. That is Allyn’s iPhone X next to it.
Full disclosure – We didn’t take the top picture. It is from 1973.
The other most popular reason for visiting this island is the Puffins that are so cute. Unlike penguins, even when you walk a long distance you are still way far away from them. The first photo is shows how far away we actually were. Photo 2 is with the attached telephoto lens wide open and photo 3 is just a blow up of a small area of 2. I love this camera. 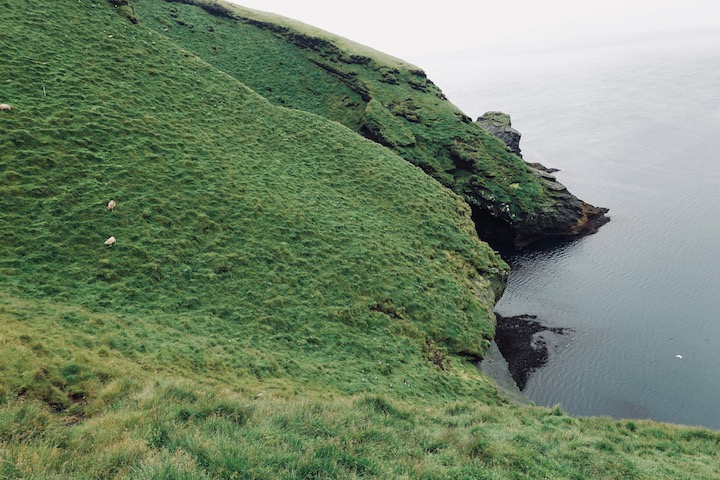 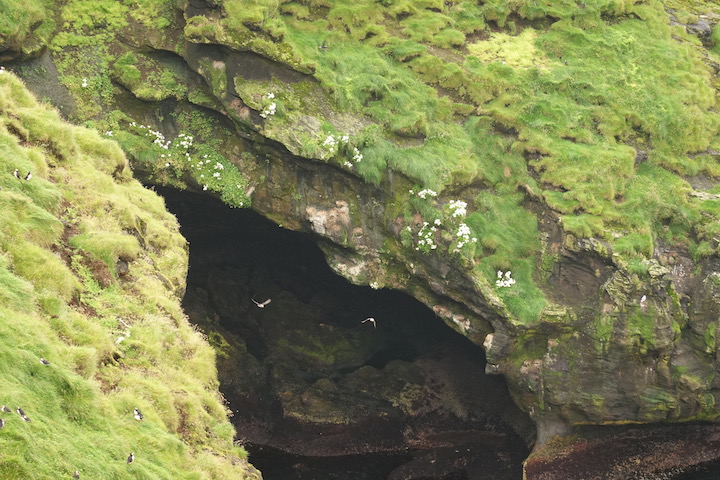 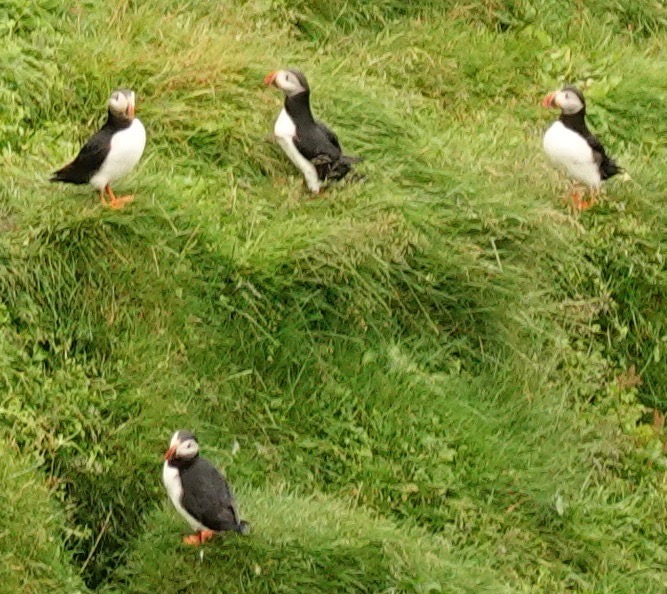 Iceland is home to between 8 and 10 million Puffins. 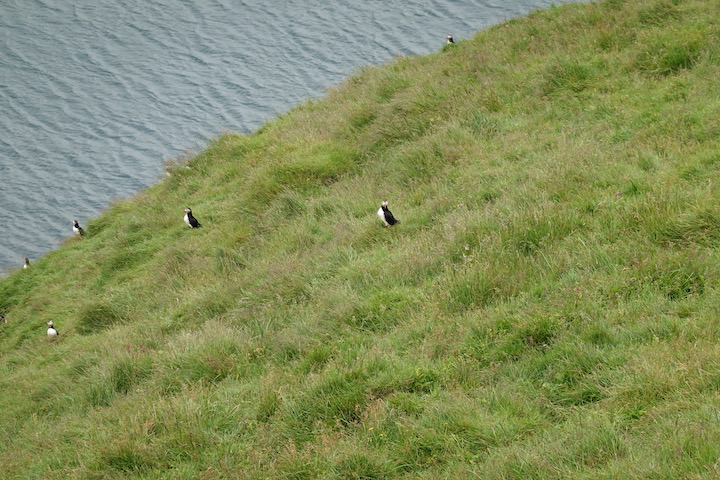 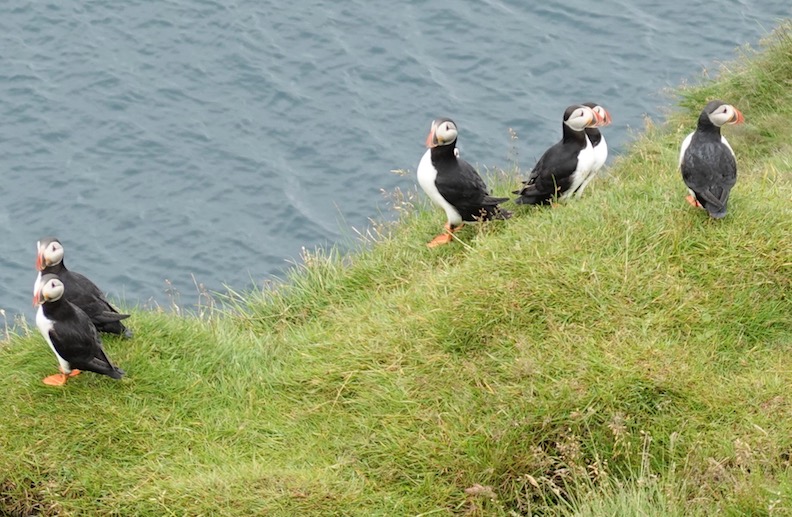 Some Puffin facts:
*They change their color during the year.
*They spend eight months out at sea.
*Each female produces a single puffling every year.
*Each bird has more than a square kilometer to itself, so it is very unlikely that anyone will spot a puffin on the open sea in winter.
*In late spring, thousands of puffins form large colonies on coastal clifftops, coming together for the breeding season.
*Puffins are monogamous. They usually mate for life and a couple can stay together for over 20 years!
*They make burrows (nests), where they lay their single egg. Each year they return to the same burrow.
*The male and female share parental responsibilities, they take it in turns to incubate the egg. It takes 36-45 days for the baby puffling to hatch.
*Atlantic puffins have incredible skills. They can dive to depths of about 60 meters and fly at a speed of 88 km/h (24m/sec) by flapping their wings 400 times per minute. The reason for why they need to flap their wings so fast is because their bones are not hollow so they are heavier than other birds. This is the reason why they can dive down as far as they do.