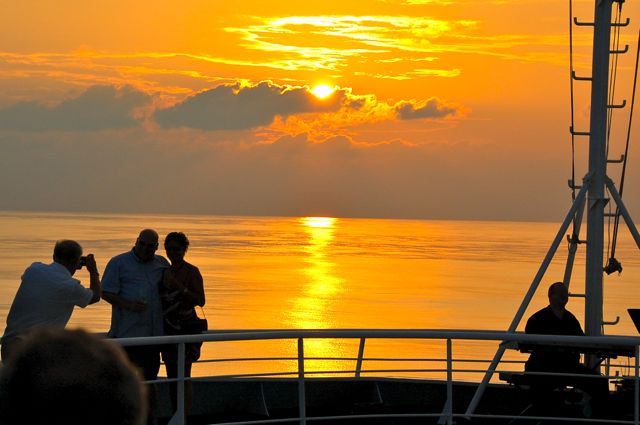 We had an absolute marvelous time. Much of it was because of just being together and being able to travel the world in a grand, unhurried style. Also we met and reacquainted ourselves with many wonderful folks.

Cruises are great. Just think, visiting 50 cities in 20 countries on a floating hotel with no intermediate airports and packing.

Unfortunately the ship is definitely going downhill. Much is subtle and only noticed by experienced past passengers, but it is generally fine and better than most. However we have cancelled our one month cruise this summer on the Mariner and will be trying the Seabourn Sojourn, a brand new ship.

Racket – They were constantly banging away right in front of our suite. True they stopped when Allyn called to complain regularly, but that didn’t stop them from starting again. We were happy to give them our schedule which often was off the ship for hours and days at a time, but that offer was rejected.

Gym – The gym is very tired. Ironically it is the one part of the ship they do not maintain as well as others. All great hotels keep their gyms immaculate for obvious reasons. Here they hope you will wipe up after yourself. Much more important was the physical fitness instructor who was TERRIBLE. Many people, including Allyn, just quit going to his classes. There was never any hanging around the gym to help people. If you wanted to pay, he was available. That was the single biggest experience downer for her on the cruise. He had a terrible attitude.

Destinations Services – These people remind me of power hungry people, every one of whom would have been fired if I owned the ship. They were there to say “no” and revel in it.

Concierge Services – She was bad, uninformed and lazy. I provided my own concierge service to people who knew I am a good researcher.

Food – By in large it was good, just not as good as previously and very stingy on expensive items versus previously. They are very proud of their steakhouse, Prime 7. People want to eat there because the other restaurants are so bad by comparison.

Service – The maid and butler staff were generally very good and the deck staff had great attitudes. When the ship got close to full they were overworked to a point of becoming ineffective.

Entertainment and Lecturers – Sporadically great, often bad. This is way worse than previous, but better than most.

Captain Dag – Either he quit or was fired, depending on the rumor. Normally that is actually a non issue for a passenger. But he was bigger than life to many passengers for years on the Voyager. It is sad that he is gone. Where else do you find a captain in the pool every sea day playing volleyball with the guests? Maybe the new owners don’t like that. Regardless, it was totally disgraceful when they had the final farewell film of the four months, and his face did not show up once. That symbolizes the current owners.

Park West Galleries – I have written twice now about their art auction racket. Regent doesn’t seem to care because they profit big time. Even Royal Caribbean just fired them. My guess is Regent will get rid of them when the lawyers make them.

Staffing and Payroll – I have had many conversations with top management because I am a good customer, historically a fan, and presumably a businessman who gets it. They have an interesting attitude that they have people problems because there is a need for better skills and management. They don’t think they have a payroll problem. They say money is not the issue because they do not need more staff. I agree in concept that they have enough people, except they pay so little (all the lines do) that they lose good people who have other options. Middle level staff work 7 days a week 10 hours a day and earn just in excess of $1,000 monthly and nothing during their vacations.

Conclusion – I am definitely not saying that I will not go back. We will probably travel with them next year, if for no other reason than the itinerary works. They certainly are better than Silver Seas which is a joke altogether. It reminds me of a friend who often says that he had the worst sex ever last night – and it was terrific!