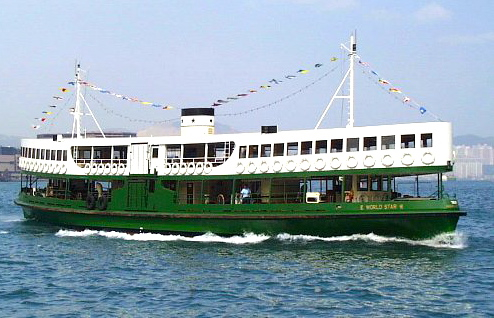 A Star Ferry hit us as we were leaving Hong Kong.

Here are some facts that you must have to grasp the situation:

·     Victoria Harbour (Hong Kong) is constantlyloaded with vessels. The Star Ferry crosses from side to side, all day long, taking just nine minutes. It crisscrosses while the traffic intersects.

·     Admiralty law gives the right of way to the ship on the starboard side (that was us).

·     Chinese superstition is that a bare miss drives away the evil spirits.

·     At ports all over the world, the local pilots board the ship and actually take control during port navigation.

So there we were leaving Hong Kong and it seemed like a ferry was in a collision course. Our wonderful Captain Dag kept blasting the horn to no avail. You can imagine the inertia that these ships have. They don’t just stop when the brake pedal is pressed.

The pilot did his best to lurch the ship as much as possible. Nobody could even tell if there was a collision. Regardless Captain Dag was EXTREMELY unhappy.

Everything was stopped immediately while an inspection took place. That is important for safety and insurance reasons, as well as perhaps disciplinary ones. Anyway, they circled our ship a couple times and finally found a scratch a few inches long where the two boats actually touched.

All that ultimately happened was drama, except for Captain Dag’s mound of paper-work.  We were delayed a couple hours and who knows what happened to either the ferry captain, or the evil spirits.