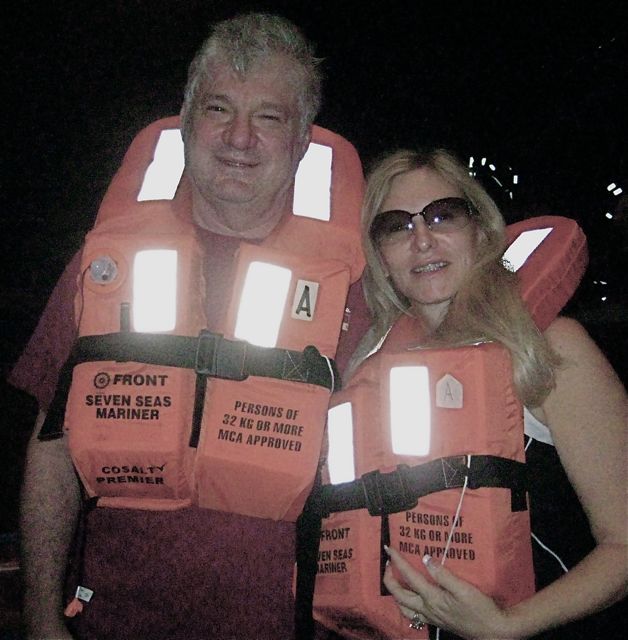 Not unlike many other cruises, our second day was a full day at sea. This gives people a chance to get acclimated to the ship and catch up on much needed rest in case of jet lag.

The most frequent questions I get from non-cruisers are: 1) “don’t you get bored”, and 2) “what about the motion”.

First thing this morning was the usual mandated lifeboat drill. Over the last ten years or so, the cruise lines have been changing their evacuation procedures. It used to be that passengers, in case of emergency, would always queue up at their designated lifeboat .

Now it is more typical to have passengers gather in large public area. The theory is that it keeps them out of inclement weather and maintains control. I like the new method and Regent Cruise Lines has changed to it.

Also, the life preservers have been upgraded over time. New models are lighter, use Velcro (which is easier), keep the neck up, and have lights that automatically go on when hit by water.

Even better is technology to build the ships properly and avoid icebergs.

As it relates to boredom, we already had to miss two good events this morning. There was an enrichment lecture on world power and historical struggle in this region. This will be shown again in our cabin, so missing it was OK.

Also there was a special party by the General Manager, but we’ll have plenty of parties.

It was very important for Allyn and me to get off to a good start by eating healthy, and spending significant time in the fitness center. We did just that. There is an entirely new set of equipment here, so that will be nice.

After lunch we tried massages in the spa. Mine was good; hers was not. We recorded the masseuses’ names for future reference.

Before dinner they had a function that I have never seen or heard of before. They had a “Mariner Block Party” where at 6:00 p.m. we went outside our cabins with glass in hand, and met our neighbors while being served cocktails and snacks. What a great idea.

Regarding my phone that I left on the bus yesterday, it is gone. They said it wasn’t there. I’ll get a replacement in a few days. I’ve been without it for 30 hours now and life still seems to still exist – but then again, I am in the middle of the ocean somewhere.